Does a country’s ‘innovation readiness’ translate into economic impact?

A recent article on Nature’s Trade Secrets Blog1 looked at ways to measure a country’s attractiveness for biotech investment. Specifically, it explored a possible relationship between the 2013 Scientific American’s innovation scorecard data2 and the 2013 edition of a recently developed Venture Capital and Private Equity (VCPE) attractiveness index3.

A replication of the regression analysis performed in the article1 is provided below (Figure 1). The result (R2=0.5896) suggests that there is a positive correlation between factors facilitating or enhancing innovation (innovation scorecard) and the level of activity of the VC and PE industry (VCPE index) in the same country. 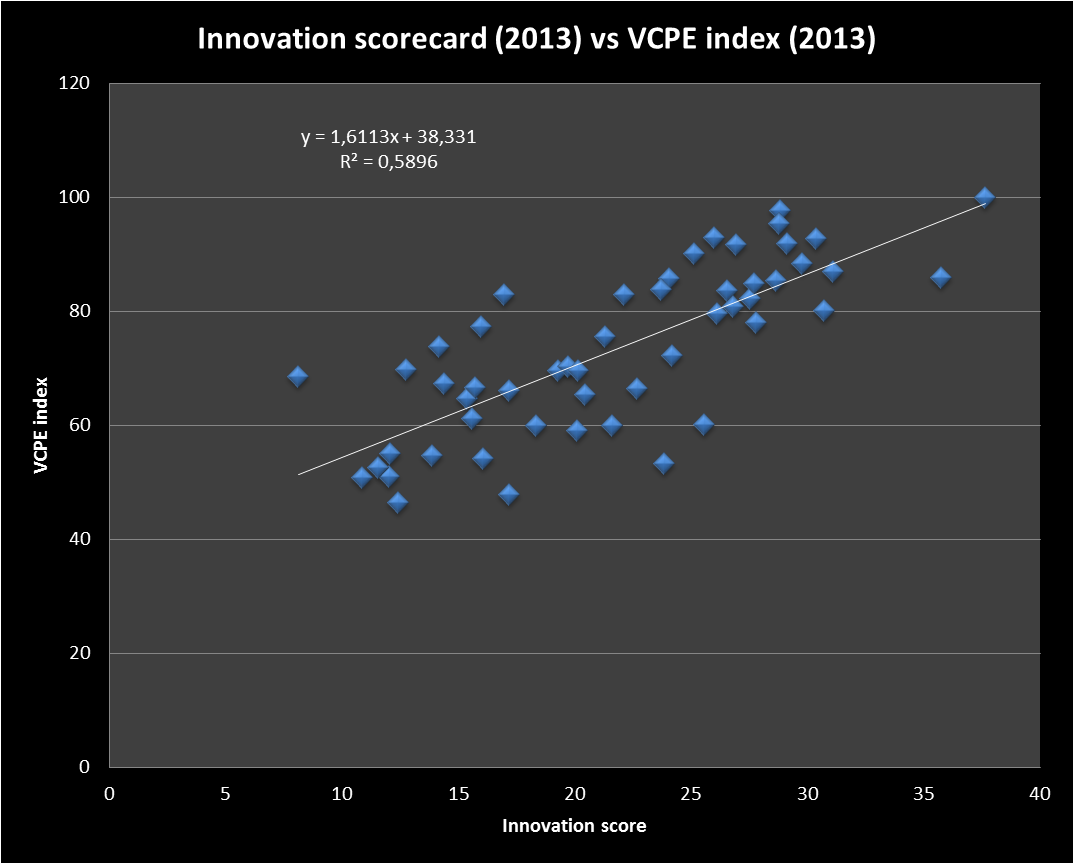 However interesting, a relationship between the innovation score and the VCPE index does not equate to causation, nor does this mean that the one can serve as a predictor of the other. The exercise prompted me to look at other economic indicators and their potential relationship with the Scientific American innovation scorecard.

The Scientific American has been publishing its innovation scorecard annually since 2009 as part of an in-depth analysis of factors affecting the ‘biotech innovation readiness’ of a variety of countries2. The 2013 results were released at the beginning of this year. The scorecard takes into account a basket of parameters, including IP, enterprise support, education/workforce, policy and stability, amongst others, when assessing a country’s ability to innovate in the biotech sector. In aggregate, the categories produce a score for each country from 0-50. Below is a bar graph that highlights the scores of 54 countries, including South Africa (red bar; other BRICS countries – Brazil, Russia, India, and China – have been highlighted orange, for illustration purposes), using data published by the Scientific American2. 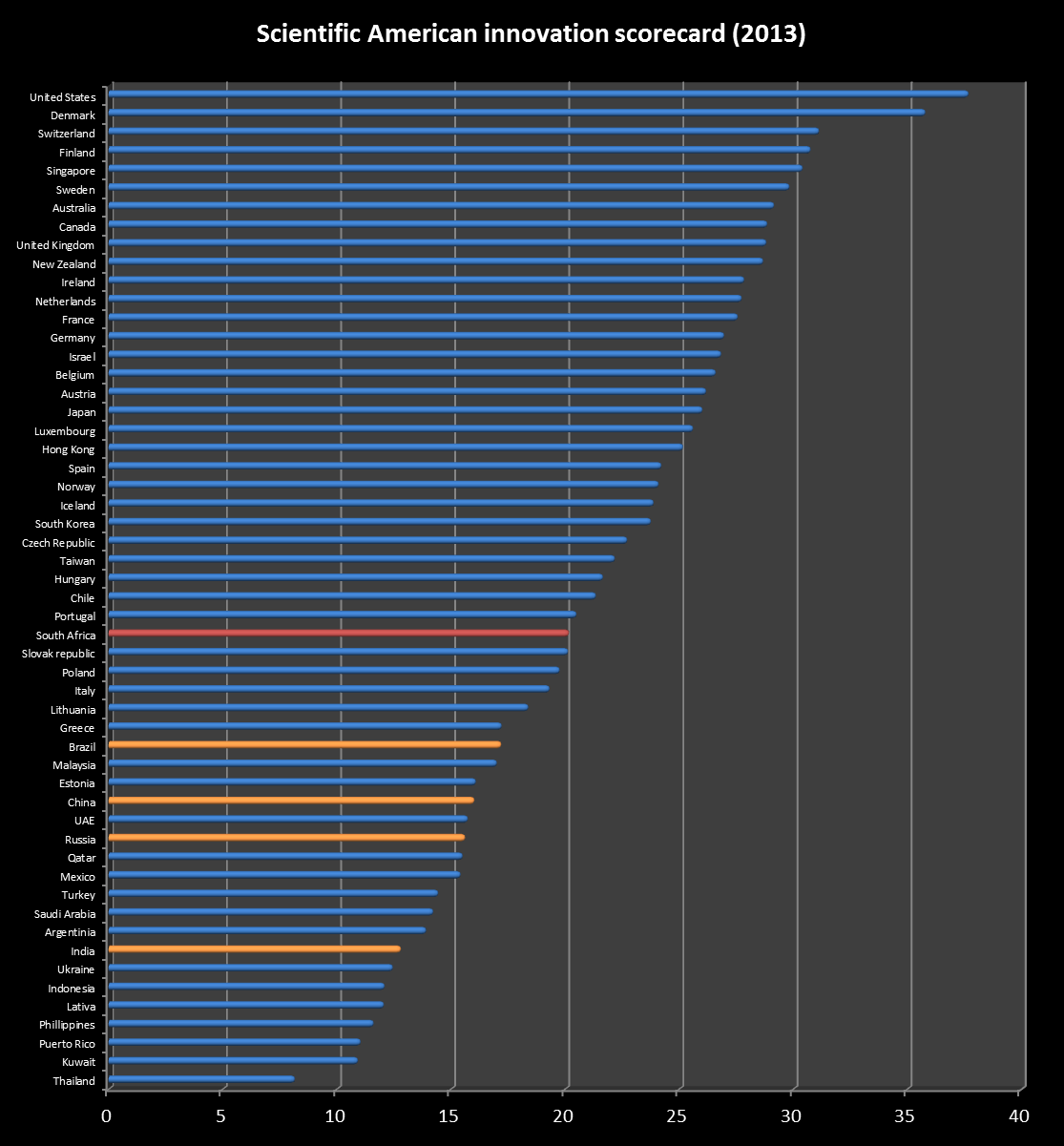 The VCPE index is based on research on how to measure the attractiveness of a country for investors in Venture Capital (VC) and Private Equity (PE) limited partnerships3. The project was initiated at IESE Business School Barcelona in 2006 with a European pilot study. From the European study, the project later expanded into a global report. Recently, the 2013 edition was published. In terms of the VC and PE attractiveness, South Africa (69.7) features just below the median (73) of the countries included in the assessment (Figure 3). China (77.4) and India (69.9) rank above whereas Brazil (66.1) and Russia (61.3) rank below South Africa. 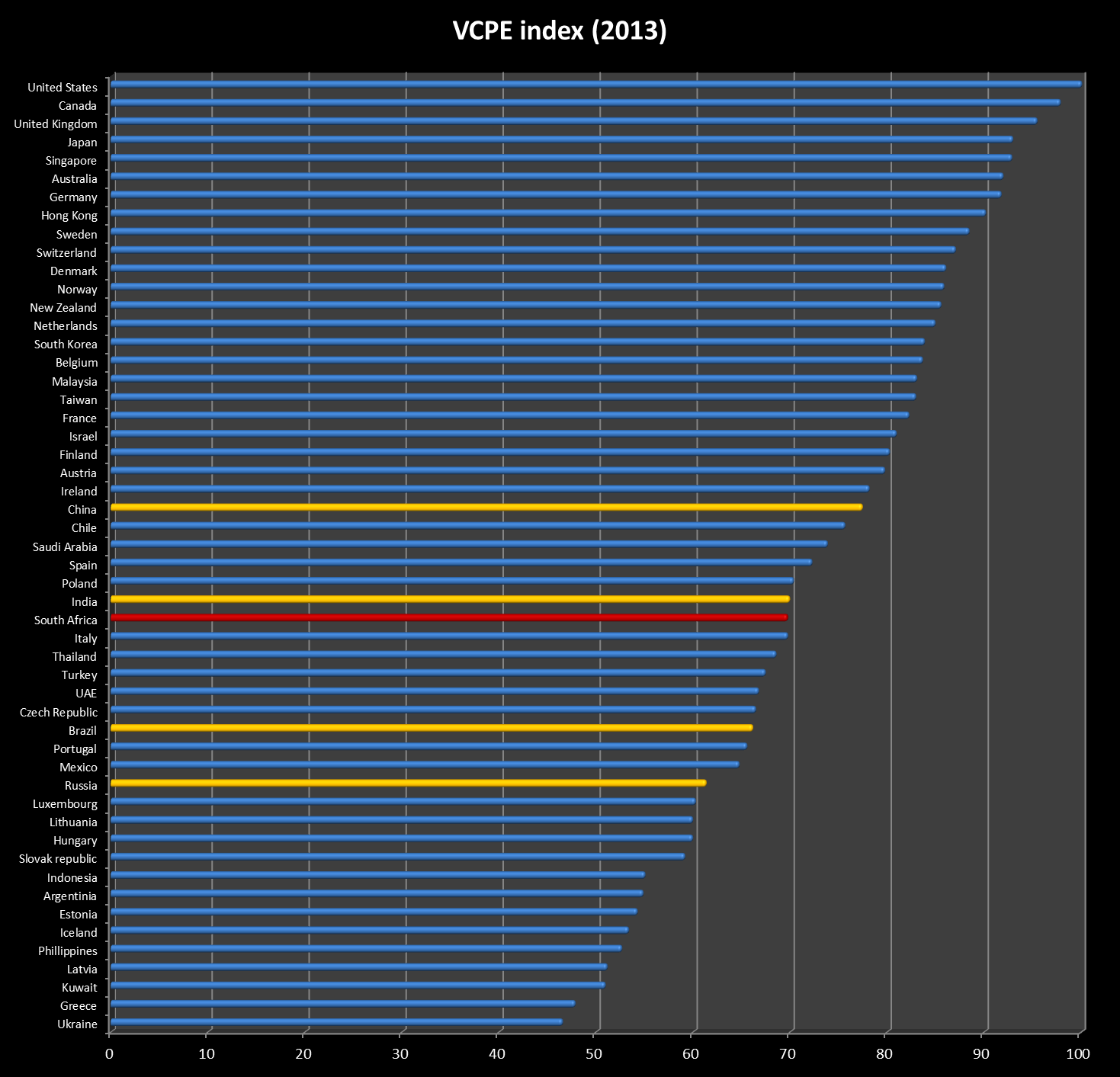 Notwithstanding the need for a more in-depth analysis, these permutations and illustrations provide interesting food for thought. Systemically, what might be the relevant antecedents to a country’s biotech innovation readiness, and what might be the appropriate measures of outcome and impact? Would these measures be different in an emerging economy when compared to a developed nation or could they be applied universally?

In contemplating these points, I looked at other economic metrics in relationship to the Scientific American’s innovation scorecard.

Firstly, I took Gross Expenditure on R&D (GERD) data published by the World Bank4 and plotted them against the Scientific American innovation scores (Figure 4). The regression analysis (R2=0.5972) suggests that there is a positive correlation between the two data-sets. It is limited by the fact that the latest available GERD data are from 2009 while the innovation scores are from 2013. However, if one assumes that changes in GERD over the last 4 years have only been marginal (if at all), using the 2009 GERD data seems valid. A positive correlation between GERD and ‘innovation readiness` of a country may not come as a complete surprise, seeing that the former entails R&D spending by public and private sectors, which is in many industries seen as an antecedent to innovation (it certainly is in the biotech sector). Secondly, I used FDI (Foreign Direct Investment) data published by the World Bank5 and compared these with the Scientific American’s innovation scores. Here, the resulting picture is far from clear, the regression analysis looks messy with no apparent correlation between the two data-sets. This is interesting, as one would expect a positive effect from a country’s innovation readiness on FDI, unless the above relationship between VC and PE activity only points to national investment activity and excludes FDI. Obviously, the fact that the innovation scorecard data are from 2013 and the FDI data are from 2011 will have an impact. Key questions in this regard are: (i) how rapidly can the innovation scores change (e.g. in response to policy changes) and (ii) what is the lag between changes in innovation score and impact on FDI, if any? 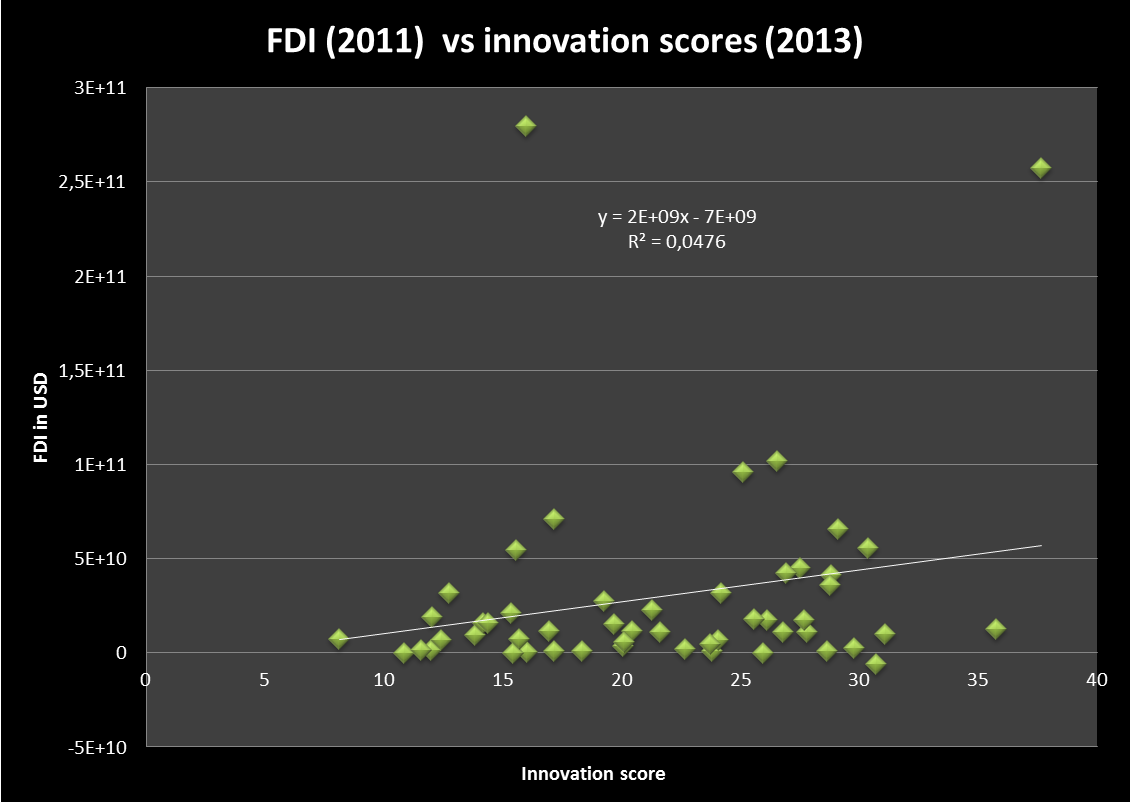 Thirdly, I took a look at how SA features in terms of FDI in comparison to other countries, in particular other BRIC nations. Here, the situation is fundamentally different from what I found in case of the innovation score and the VCPE index. With respect to FDI, SA finds itself quite at the tail end (USD 5.9 bn) of the other countries and is clearly way behind its BRICS peers (Figure 6), with China (USD 280 bn) and the US (USD 257 bn) being way ahead of all other countries. 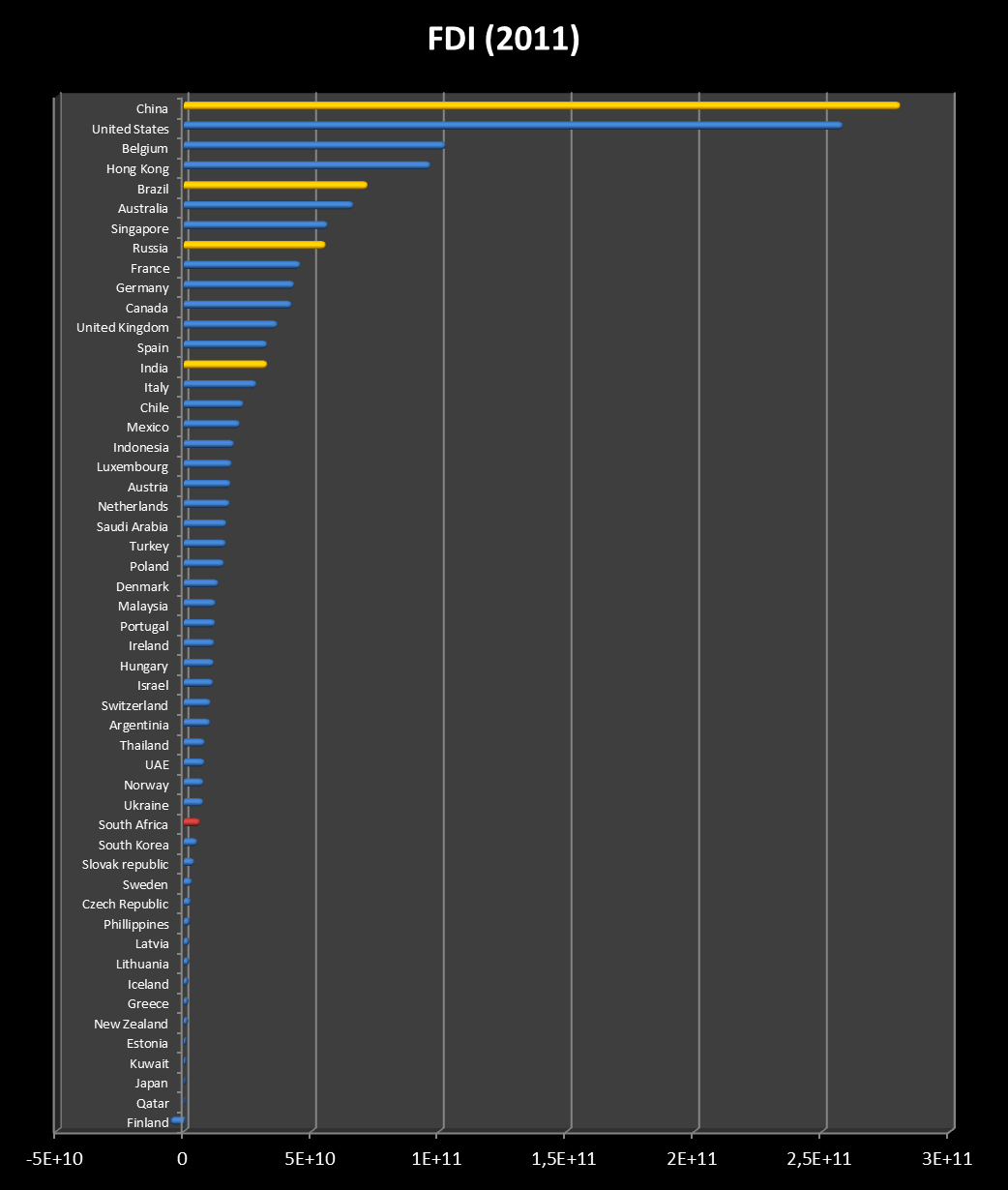 This crude analysis points to the underlying complexities when trying to rationalise the relationship of investments into biotech – and a nurturing socio-political/socio-economic environment – and economic impact that can be derived from it.

The analysis also indicates that attractiveness, by whatever kind of measure, does not necessarily result in heightened demand or a particular type of activity (e.g. enhanced VC or PE activity). Most probably, there are complex systemic mechanisms at play, the effects of which will be emergent in nature and may only occur with significant delays in space and time.

With respect to South Africa I am wondering if the lack of FDI, to take one potential impact measure, may have to do with the lack of understanding and/or awareness of biotech activity in this country. I must assume that there is logic to the Scientific American’s innovation scorecard. If their perception of the ‘innovation readiness’ of South Africa is not entirely flawed, why are the corresponding capabilities not resulting into economic impact? If there is a positive perception about the country’s ability to support innovation in biotech, what can we do to convert it into socio-economic returns?

More food for thought, I think…